I’m working on this mapping chart for Mixbus and Mixbus 32-C (version 4 & 8) and the Behringer BCF2000 controller and could use some help with a few of the items.

I am using the Mackie “Logic” emulation on the BCF2000 on a PC to test this. Just a quick note: When you are changing modes into Logic Mode by holding down the third top button while powering up, watch the LCD and let go after you see “LC” right away — if you continue holding the button down you will go into “Global Edit” mode instead and nothing you expected to work will function. (That is, you will NOT be in Mackie Logic mode anymore.)

I’ve renamed a few of the names used in the manual, like changing “Cycle” to “Loop” for the button that turns a region into a loop and engages loop playback, and for “Enter” (now “Sel-All”) and “Replace” (now Reg-End, though I cannot find how to do the region beginning, as I cannot find the equivalent “Drop” button). Instead of “CH >>” and “CH < <” I have “Shift <” and “> Shift” for shifting the sliders; and “CR Up” and “CR Down” are now “Next” and “Prev”, since they cycle through the tracks.

Here is the image, with the knob and button assignments listed below. (Click image to see full-size in new tab.) 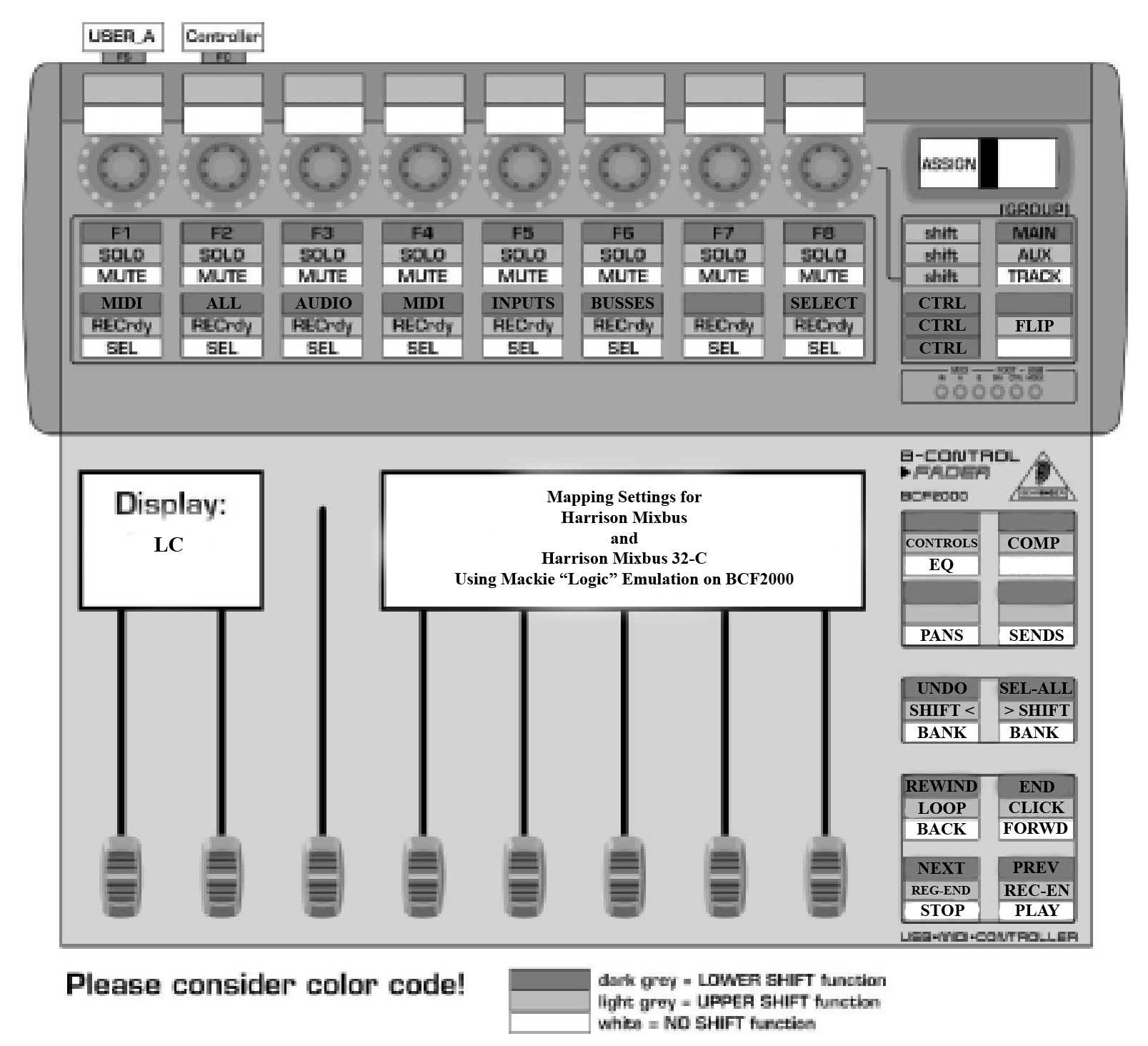 These only become available after selecting a track via the second row of buttons beneath the knobs (without any modifier). The row above that are mute buttons. (Refer to image…)

Edit (default) (the PANS button in image above)

Store (the EQ button in image above)

Exit (the SENDS button in image above)

Changes Knobs to affect Mixbus Send levels
Press knob to enable/disable associated send.
Note:
Press “Flip” (Upper-left “Shift” with lower right “Option” key – or by image above, Shift-FLIP) to allow instead controlling the send levels with the sliders and the tracks’ volume with the knobs.

Shift-Store (Shift-CONTROLS in image above)
Controls the input/output and solo routing
Knob-1 — Not sure what it does!
Knob-2 — Input/output (Disk/In – turn slowly!)
Knob-3 — Isolated toggle
Knob-4 — Lock toggle
Knob-5 — Lights up blue dot at top of channel strip – no idea what it is for!

Buttons for each track:

CTRL-BANK-Up selects all.
CTRL-BANK-Down is supposed to be “Undo” but I’ve not seen it work yet.

(Portions excerpted from the Mixbus manual):
CTRL plus the lower row of buttons takes you to different “Views” of the sliders.

CTRL-Lower-Button-1 — MIDI Tracks: this shows only the MIDI (instrument) tracks on the surface. Audio tracks and buses will be skipped over, if you adjust the Channel or Bank buttons.

CTRL-Lower-Button-2 — Global View (ALL): this resets the view to showing channels in sequential order, with the first available mixer channel on the far left of the surface.

CTRL-Lower-Button-3 — AUDIO Tracks: this shows only the Audio tracks on the control surfaces. Midi tracks and buses will be skipped over, if you adjust the Channel or Bank buttons.

CTRL-Lower-Button-5 — INPUTS: This shows “buses” that were created with the New Track dialog. Buses are often used as live inputs to the mixer. MIDI tracks, audio tracks, and mixbuses will be skipped over, if you adjust the Channel or Bank buttons.

CTRL-Lower-Button-7 — Outputs: Currently unimplemented; this will show the Click (metronome), Auditioner (solo bus), and Monitor buses in the future.

CTRL-Lower-Button-8 — User (SELECT): This shows the first 8 channels that are “selected” in the mixer GUI. This allows you to select a discontiguous collection of channels, and control them side-by-side on the control surface.

Need to find out what is the button for “Drop” for the region selection options to be useful.

Please let me know of additions or corrections to this document and I will keep this first post updated.